Well, this is a doozy. If Alastair McAlpine* was at all worried about negative responses to his review of Lore of Nutrition, he’s perhaps less so today. This is because Prof. Noakes and Marika Sboros have now responded to said review, and in doing so, made his case for him.

I say this simply because McAlpine’s review documents exactly what the Noakes and Sboros responses manifest, namely a fondness for cherry-picking, and churlish and personal barbs aimed at detractors, more often than a defence of claims and arguments.

Here’s Prof. Noakes’s review. He chose to respond to McAlpine line-by-line, or at least chunk-by-chunk, and I’ll do something roughly similar in response to parts of it. As usual, my focus is less on the science and more on the rigour of the arguments presented. Noakes writes:

To begin with we need to note that Dr McAlpine is a paediatrician with a special interest in the management of neonates. Whilst I would not for a moment question his expertise and dedication in that discipline, it is clear that he has no special training or expertise in nutrition or dietetics; he has yet to publish a single scientific article in a peer reviewed journal (as checked on PubMed) and, to my knowledge, has yet to complete a clinical trial dealing with any aspect of nutrition, especially in adults, which is the focus of Lore of Nutrition.

So, one might reasonably ask: What authentic professional qualifications and expertise does Dr McAlpine have for producing this column, which is potentially highly damaging to my professional reputation and to that of our book?

Perhaps he doesn’t meet this standard, depending on how we define “authentic professional qualifications” (apparently they exclude an MBChB). But opening your response in this fashion is a lovely example of “poisoning the well”, in other words framing your opponent in such a way that an audience is primed to distrust the speaker, rather than interpreting their words objectively, and dealing with arguments on their merits.

If sales are up, it seems that this authentic-qualification-lacking mere paediatrician isn’t causing any harm at all, and would never be likely to. Noakes tries to have it both ways, dismissing his opponent as inconsequential, while lamenting his traumas at the hands of the same opponent. He continues:

Importantly, to conform with the model of postmodern intellectual deconstructionism that he practices, Dr McAlpine offers not a single solution to our current dietary “mess”. His job is to undermine any potential solution to the obesity/diabetes pandemic. His approach is best described as therapeutic nihilism.

“Postmodern”, “deconstructionism” and “nihilism” are all perfectly impressive words, but they don’t mean what you seem to think they mean, Prof. Noakes. Much as with “the Anointed” or “the Wisdom of the Crowd” and other terms you’re fond of deploying, soundbite labels need cashing out in argument, rather than merely a confident delivery.

There’s absolutely nothing postmodern about McAlpine’s analysis. You might think he’s wrong about the facts, and you can then make that case, which you mostly avoid attempting to do. Likewise with “deconstructionism” and “nihilism” (what? How does that even relate to the review?).

This wordwang comes across as an attempt to appear profound, while saying nothing of substance (which, ironically, is closer to some postmodernist writing than anything McAlpine says).

Lines 11 to 15. As Dr McAlpine is not a published scientist who has ever been forced to defend his discovered facts in the global scientific community. So, whenever he deems it convenient, he is quite happy to present his personal opinions, rather than proven science, as proof of indisputable scientific facts. This is intellectual grandiosity.

McAlpine has written what is explicitly a book review, rather than a scientific paper. That’s going to contain personal opinion by definition, rather than “convenience”. (And as an aside, “whenever he deems it convenient” is one of about 257 snide remarks in this Noakes response, which is itself full of gripes about personal attacks.)

Noakes is saying that until your “discovered facts” are peer-reviewed and published, everything you say is just noise that can be ignored. (Except for pro-LCHF studies not conducted by Noakes that confirm his view, of course.) And, that you’re not allowed to rely on or cite studies that refute his view until you’ve done time in the lab. (Terms and conditions apply.)

Or, no: He’s basically saying something like “DO YOU KNOW WHO I AM?”

Recall that my HPCSA case, the topic of the book, lasted three years during which I prepared all the scientific material for the book and which occupied 12 days of testimony at the trial – again conveniently overlooked by Dr McAlpine who incidentally was nowhere to be seen when my HPCSA trial was in session.

Why is it a problem that he didn’t attend if the book itself presents the “totality of evidence that you need to consider“? This is a transparent attempt to simply discredit McAlpine (again). If he’s wrong, you can tell him which sections of the book he misread, rather than present this red herring. Is this a negative book review by the author himself (Noakes), or is the tweet about the book false?

Line 34. Prior to the publication of her article entitled Is Tim Noakes the Malema of South African Medicine?, Dr Stillwell was involved in a three-way Twitter conversation with Jacques Rousseau Jnr and another Johannesburg doctor. They were specifically discussing her upcoming article, especially its’ catchy title.

I find it interesting that the title for Dr McAlpine’s “review” has a rather similar catchy title suggesting it could have been created by someone with a journalistic training.

Twitter search isn’t finding the conversation in question. But in any case, if this conversation happened as reported here, how is it evidence of a conspiracy except if you’re suffering from a serious case of confirmation bias?

Neither Stillwell, myself, or McAlpine have journalistic training, as far as I know. It would furthermore be quite unremarkable if a headline was crafted by someone with journalistic training – seeing as that’s part of their job, but this vague allusion to something sinister makes no sense.

Lines 48-49. I have not fat-shamed anyone. I simply pointed out that the then Chairperson of the British Dietetics Association, an unashamedly vegan/vegetarian front organization, is obese. Obesity is a serious condition. I believe that if we are to tell people how to prevent obesity, then perhaps at the very least we need to understand how best to manage our own weight.

No, you didn’t simply “point that out”. In the incident in question, you explicitly said that obesity undermines credibility when it comes to matters dietary. It’s not as if you routinely say to people on Twitter: “Hey! You’re obese! That’s a serious thing!” 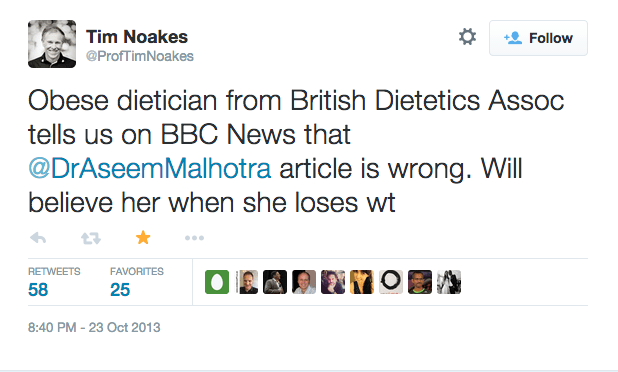 As for “vegan/vegetarian front organization”, what? They are hiding their sinister agenda well, in that case, seeing as their website provides the standard recommendations of a “balanced diet” (including fish and limited red meat) that Noakes believes is making us sick. Plus, even if veganism or vegetarianism is somehow evil,  perhaps attempt to make that case, as these sorts of allusions to dark forces simply support the perception that you’re prone to conspiracy theories.

Line 135-138. Any serious anthropologist reading this would simply advise Dr McAlpine to stick to his speciality….

Line 139-149. Unfortunately these hoary old colonial “experts” knew a little more about life, nutrition and health than does the 34-year-old Dr McAlpine.

Paediatricians can only talk about paediatrics, and I’ll start listening when you’re 35 (or, old enough, whenever that is), “Dr” McAlpine.

Line 156. Perhaps Dr McAlpine needs to read the work of Harvard Professor Dr Alessio Fasano before he labels the “leaky gut syndrome” as pseudoscience. A good reference amongst others in Lore of Nutrition is: Fasano A. ‘Leaky gut and autoimmune disease’. One is surprised that Dr McAlpine, a paediatrician, is not aware of the work of Dr Fasano who discovered the zonulin pathway and is another potential Nobel Prize winner.

As Fasano himself says, “there is the objective fact that this term that actually I really don’t like of ‘leaky gut’ has been used and abused”.

Fasano believes that celiac disease is more prevalent than his peers do. He claims that it is suffered by “one in 133 people in the U.S – a rate nearly 100 times greater than the previous estimate”, and he certainly believes that “leaky gut syndrome” exists. Nevertheless, it’s not yet a recognised diagnosis in non-alternative medicine, which is what McAlpine is saying.

“Pseudoscience” is perhaps too strong a word, as this syndrome does seem to be a source of serious scientific contestation. But it’s also at this stage not well-enough established to treat as fact, as Noakes does.

Line 158. Lore of Nutrition is one of the few books of which I am aware in which the author, that is I, reproduces all the criticisms to which he has been exposed over the past 7 years. I exclude nothing. Uniquely I respond to each of those criticisms by first reproducing my critics’ opinions before presenting my detailed counter-arguments.

Nonsense. As noted in my earlier commentary, Noakes excludes or misrepresent all my criticisms, for example, choosing to instead repeat demonstrable falsehoods (which have been pointed out to him). Which is fine – my criticisms might be inconsequential or flawed, or both. But this is again mere evidence-averse bluster.

In short, this response from Noakes does little other than support McAlpine’s case, and should be cause for embarrassment for those who are uncritical of the LCHF movement’s epistemic exuberance, whether the science lands on their side in the end or not.