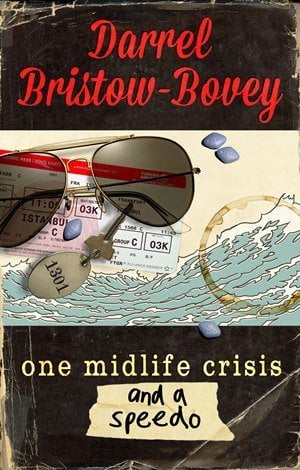 Last night, some of the English liberals that Dan Roodt is currently whining about in court gathered at a launch party for Darrel Bristow-Bovey’s One Midlife Crisis and a Speedo

, and I came away with a copy of the book in question. Well, so did everyone who paid for a copy, but I mention this as a prelude to saying that I’ve read it, and can recommend that you procure yourself a copy too.

It’s very funny, for starters. There was something worthy of a laugh on the vast majority of its pages, and at some point, I noticed that I’d been reading with a constant smile for some sustained chunk of time.

From lines that are simply funny (“I’ve never run the Comrades but I have flown long-distance in economy class, which is more or less the same thing”) to extended self-deprecating observations on awkward encounters with doctors, sales assistants, and friends, it’s a constantly enjoyable read.

But it’s more than simply funny and charming. The book deals with many serious themes too, and is on occasion heartfelt (not sentimentally so), and often thoughtful and thought-provoking. At its heart, the book is about ageing, and about coming to terms with loss and failure, and there’s much in it to relate to.

Many of you will know that Darrel Bristow-Bovey spent a long time in the media wilderness after having been caught out plagiarising content from Bill Bryson, a mistake for which he has apologised. Opinions differ on these matters, but my perspective is that it’s unreasonable to hold someone hostage to an isolated incident from a decade ago.

Furthermore, he’s a fine writer, one I’d like to see more rather than less of in our newspapers and magazines. In sum, if you’re looking for Christmas gift ideas, or for something to read while taking a break from eating and drinking too much over the next couple of months, keep this book in mind.