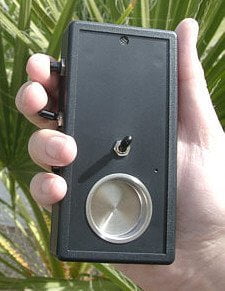 One of the many benefits of believing utter bulls**t is that your claims need to be limited by nothing other than your imagination. I was alerted to a goldmine of quackery today via an Andy Lewis tweet about Siri for homeopaths. Not simply the sort of Siri that can answer questions like “where can I buy 10 000 sugar pills” – a Siri that can actually make “medicine” for you.

It’s true (at least, the fact that someone makes this claim is true). The picture at top-left is is a “voice-programmed remedy maker“, which is a marvel of efficiency and simplicity.

In use, the device is held close to the mouth, a button on the side of the Remedy Maker is pressed in, and you speak the name of a Remedy you want immediately followed by the Potency (if any). The button is then released and a “beep” sound is heard confirming that a remedy has been recorded and stored. Then the device is placed on a table or flat surface and a small bottle of tablets, or even just one or two tablets can be placed in the small 30.3mm ( 1. 3/16″ ) diameter Stainless Steel Well that is fitted in the device. A switch next to the Well is operated and held down for about 3 seconds, and then released, and the device again beeps to confirm that your remedy has been made.

What’s that? You’ve run out of tablets? That’s no problem at all – simply place your finger in that metal well, operate the switch, and marvel as the device transfers “the vibrations directly into the body. This makes the device ideal to use as an emergancy first aid device, for example it could be used to make Apis Mellifica, which is a powerful Bee Sting Treatment, or one could give a dose of Malaria Officinalis, which is considered by many to be useful in Malaria prevention.”

At a bargain price of 395USD, this is Profitus Maximus (seeing as we’re talking sciencey).

The makers have thought of everything. It matters not if you have a thick accent or speak in a strange dialect, because “Words are used to represent a thing or situation. Many different words (even different in language) can be used to represent the same thing.” The device understands abbreviations. If you’re speaking in a loud, crowded environment, no matter – it only listens to your voice.

And you don’t even need to know which “medicine” you need! “The special beauty of this device is that within seconds you can be making vibrational remedies from literally anything you can think of, … even the illness itself. “My Throat problem”, for example, or “The pain in my leg” etc.”

If you feel like some light entertainment, spend a few minutes browsing the site. If you ever wished you could do Reiki while sleeping, or talking on the phone, go find out about the White Mountain Energy Copier, which makes this possible. Worried about the end of the world? There’s info on that, as well as a handy (for Muslims) description of why and how the Kabbah needs fixing.

For skeptics, Randi “and other closed-minded behaviour”, there’s a message for you too, which concludes with:

We don’t feel we need to prove or justify anything, our products work and we have thousands of satisfied customers, many of which are busy using our devices to save lives right now, or using these devices to improve their own wellbeing.

If you are one of the skeptics, all I can say is I am very sorry for you, and I hope one day that you will choose to open your eyes. In the meantime don’t bother to email me with your abusive and childish comments as your emails will not be opened and read.

Then there’s a link to a website called Coping with Disbelief – but the URL currently redirects to a website advertising a “Fiber One” breakfast bars and cereals. Handy, for those who are full of s**t. (This might be intended as a joke on the part of White Mountain, which would certainly offer reassurance that they’re not completely crazy).

By the way, if you don’t know Andy’s site The Quackometer – dedicated to debunking quack medicine, be sure to check it out, especially his detailed work on Steiner-Waldorf racism, mysticism and other reasons for parents to run a mile.