On May 27, 2018, three intrepid explorers set out on a voyage to parts fairly well-known, at least in a theoretical sense, because they had already been mapped out by the Captain, Jacques. The Captain took the job seriously, as he does.

Joining him – to help ensure that the plans would, erm, go according to plan – were First Mate Jacques Jnr. and Galley Slave (GS, and only for now), Signe. 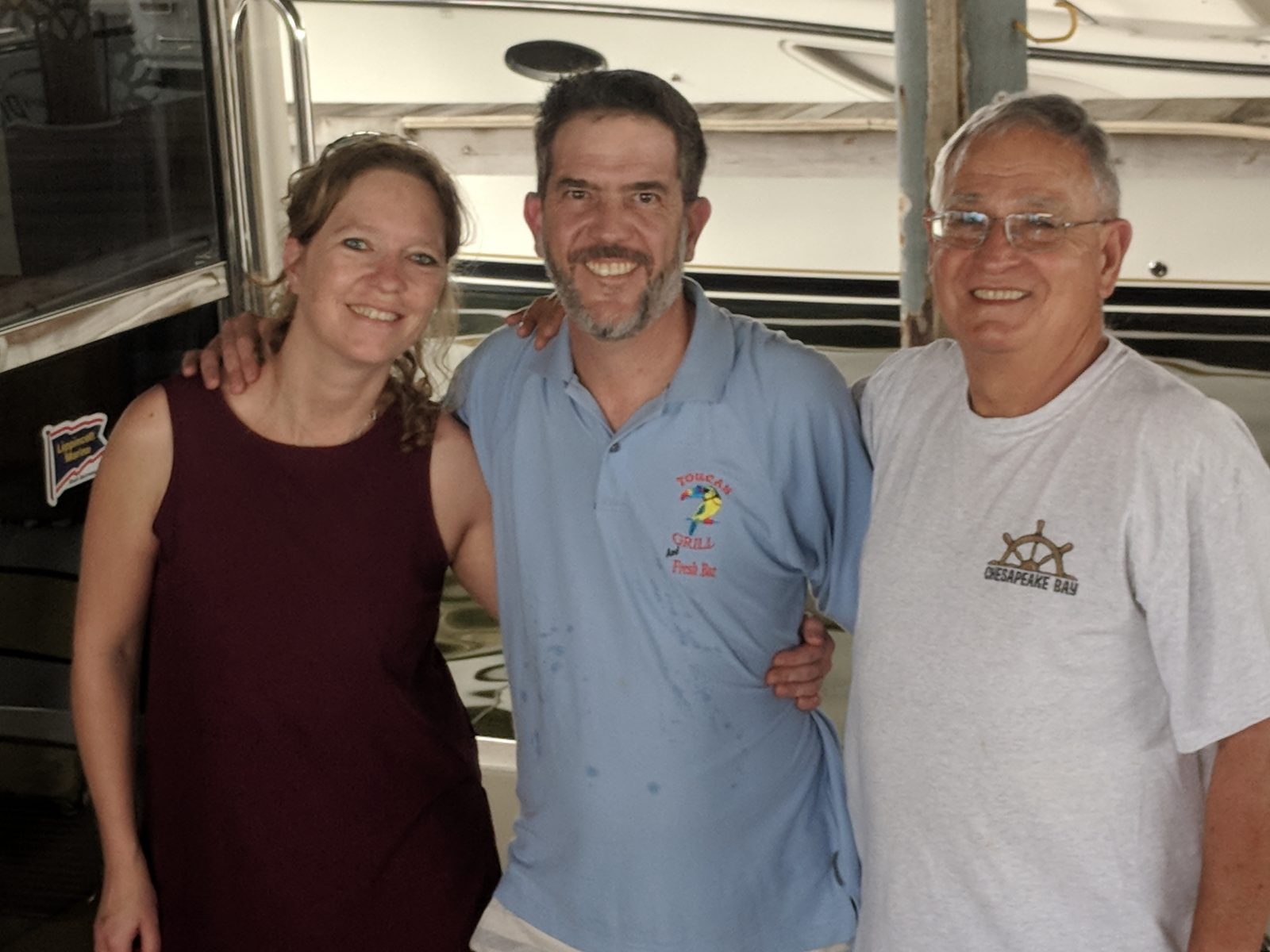 This is what they ate, and where they went.

After a late morning arrival, we set off from their home port of Piney Narrows Yacht Haven aboard La Bella Vita, a 37′ Marlow Mainship Pilot, in what was to be her longest voyage to date. 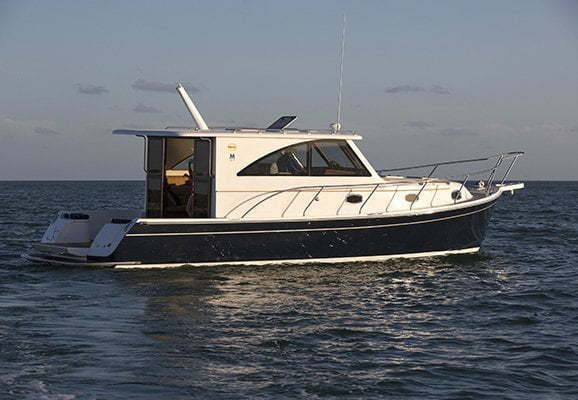 The traveling and feasting began with lunch on deck at Piney Narrows, and comprised a pulled pork platter from Tips BBQ (sandwich, beans, slaw). Then we set out to that evening’s destination, anchoring out on the Bohemia River.

There, we feasted on what GS decreed her signature “heart-healthy” feast of Greek salad, lunch leftovers, pine nut hummus, and toasted pita squares, accompanied by Pinot Grigio, then Chardonnay, then 10-yr old KWV Potstill brandy, all finished off with some Ritter Sport marzipan chocolate.

Traveling via the C&D Canal and Delaware Bay, we cruised past the Salem nuclear power station, Big Bacon Island and some large boats, eventually arriving in Cape May.

Along the way, some people pretended to work. Sometimes, they might even have done so.

Lunch was taken en route, on the Delaware River, with GS whipping up some smørrebrød (rye, mustard, cheese, tomato, pickle).

By the afternoon, we were in Cape May, where we snacked on a lobster roll from Quincy’s “Original Lobster Rolls (described as “served on a bead of mayonnaise ??‍♀️”) [And to be clear, any emoji in this post are the GS’s doing.]

Later, barbecued clams, hot and spicy steamed shrimp, oysters on the half shell, Tito’s dirty martinis and beer in a plastic glass for the Captain at American Schooner, part of the Lobster House at South Jersey Marina.

Dinner was at C-View Inn (as recommended by Bob from the marina). We had the rib special (half-rack with chips and slaw, $9ish), crab cakes, “tavern” style [did this come out of a box?] clam pizza, and some pinot grigio [definitely out of a box]. 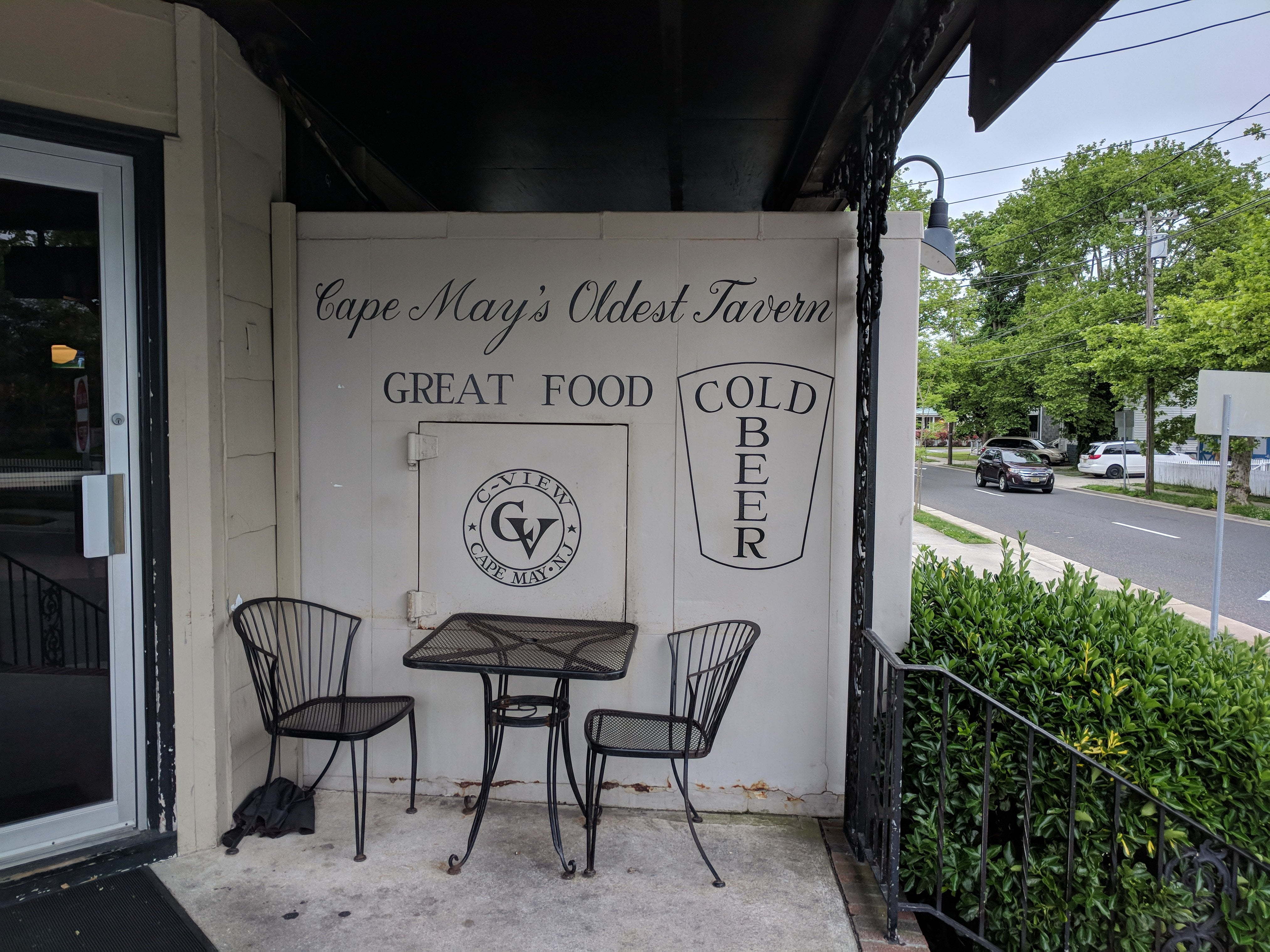 Lunch was taken en route: Cold clam pizza enlivened with Cholula, GS chicken salad with boat-made dressing. The entrance into Barnegat Bay [?⚠️] required that nothing was ingested, as everyone on our boat was extremely focused on not running into submerged rocks, while local yahoos on other boats seemed focused on creating wake-action designed to complicate our lives.

But we safely made it to Clark’s Landing Marina in Manasquan, where the traditional libation of a gin & tonic proved restorative, and accompanied us in conceptualising some of the best burgers you’d ever hope to have in Manasquan, or indeed in many other places. 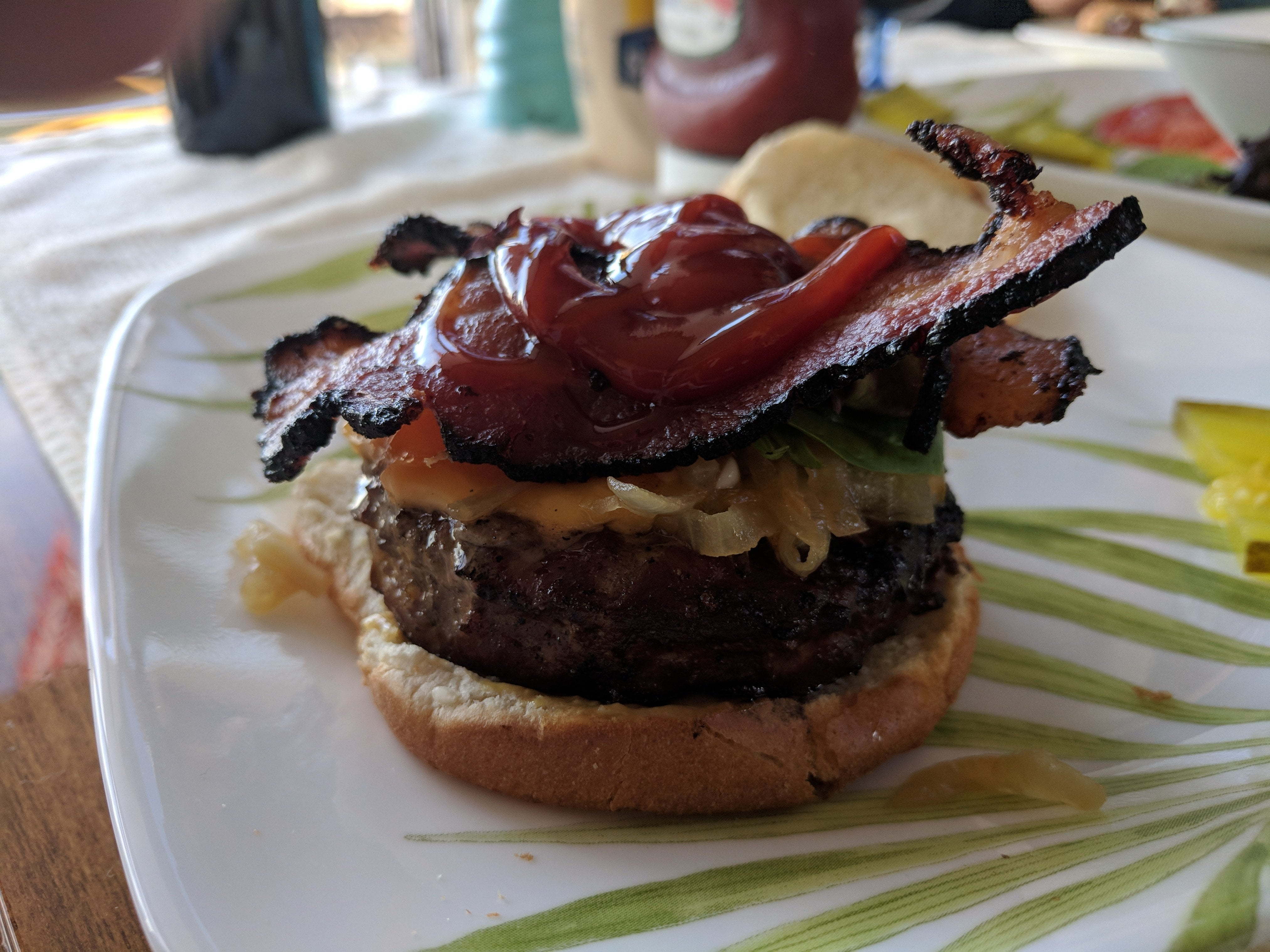 The NOAA weather robot told us to expect fog. They didn’t tell us to expect little but fog. But while we could still see enough to be able to ask GS to do her thing in the galley, we lunched en route on turkey and bacon chowder with bread and cheese for the Captain and first mate; toasted roll with peanut butter and cheese for the slave. Pretzel M&Ms, for balance.

After around 8 hours in serious fog – involving a case of mistaken identity where something that looked gargantuan on our radar wanted to know “what our intentions were”, and an idiot group of fishermen couldn’t announce their intentions because they weren’t manning their frikkin radio, we eventually made it to Payne’s Dock Marina, at the New Harbor of Block Island.

Dave, a leathery local who ran the marina – hence the immediate bestowing of the nickname “Leathery Dave” – was friendly enough, but Block Island was sparse. “Do you have WiFi?” Dave: [chuckle] “Much of the mainland doesn’t, we don’t.” “The guidebook says you’ve got a great bar?” Dave: “Oh, we tore that down. If you come back next week, we’ll have a bar”.

But it didn’t matter, because Block Island did have Finn’s Seafood Restaurant, in the Old Harbor. We started with 1 doz. oysters for the Captain and First Mate, 1 hot buttered lobster roll [much better than Cape May’s offering, but we agreed that crab cakes are a more delicious thing to explore], smoked mackerel pate with house pickles, red pepper jelly and rye crostini [sprinkled with sea salt – nice touch ?].

And, Block Island was beautiful.

Lunch en route to Nantucket: Hardboiled egg and tomato on bread with a) Anchovette and b) mayo for the Captain and First Mate, toasted roll with mustard, cheese, egg and tomato for the slave. This lunch sees her promoted to Galley Master (GM).

There are no more serfs onboard.

Dinner was enjoyed on deck: First, cold steamed shrimp with Old Bay seasoning, a selection of tartare and cocktail (horseradish) sauces, and Prosecco to celebrate the arrival at our “end destination” – the return trip would begin after two nights here. The main event was pan-fried salmon, crispy potatoes, green beans with onion and garlic, Caesar salad, Cabernet Franc. 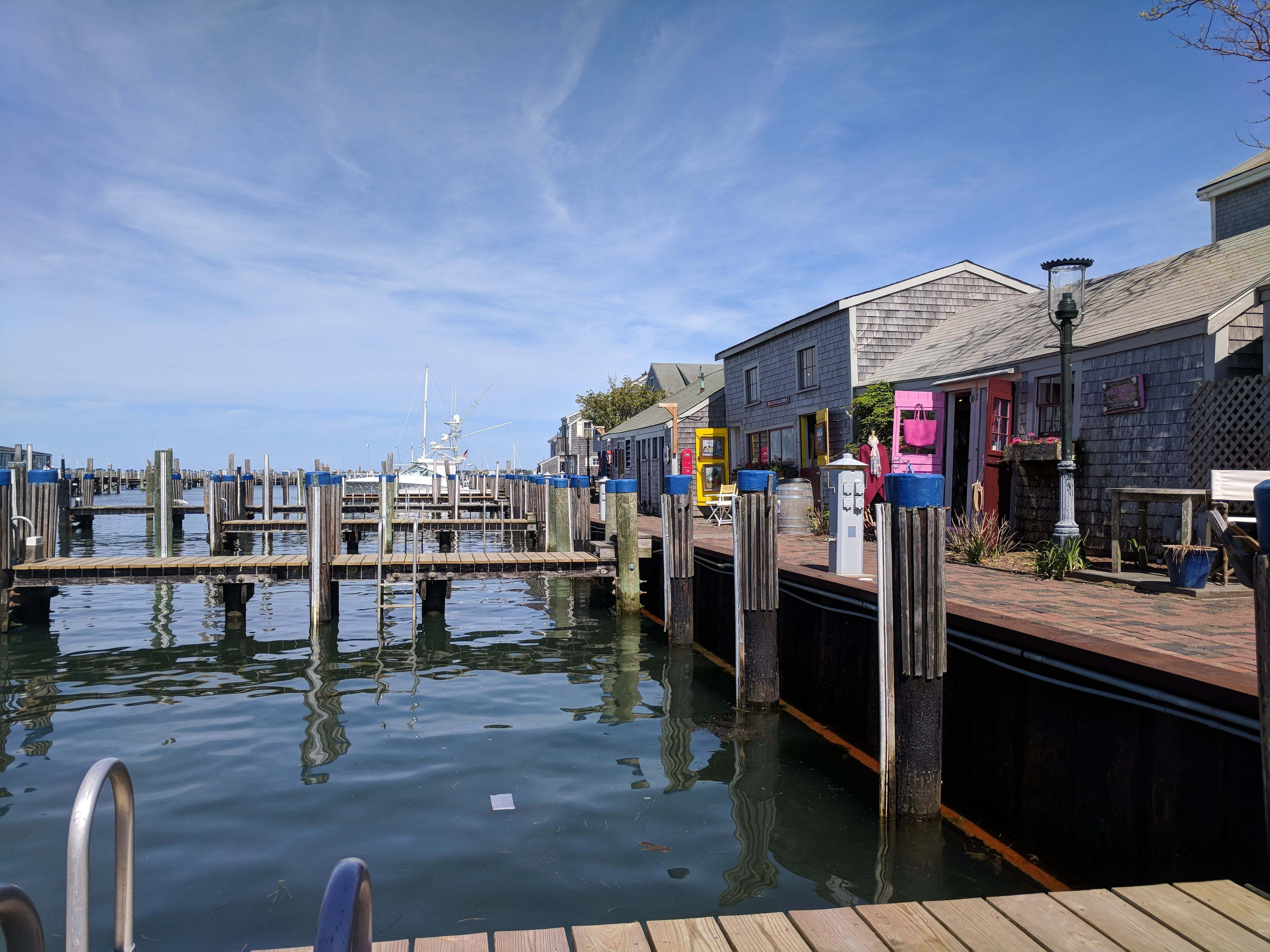 Breakfast (only recorded when the GM partakes): Fresh bread from the galley oven with, variously, Anchovette, cheese, honey, peanut butter.

Pre-lunch, we visit Murray’s Toggery Store, where the Captain hopes to procure something in “Nantucket Red”, which is their signature colour in these parts, given that we are, after all, in Nantucket.

Dinner was at Ventuno, where celebrities and other rich people are said to have been spotted. Allegedly): Complementary warm ciabatta [excellent crumb and structure ?] with olive oil; starters of fritto misto, one crostini with foie gras and chicken liver pate, and one with n’duja, smoked mackerel and radishes.

Lunch was at Harbor House, in Mystic): Two burgers (gorgonzola, caramelised onion; bacon, cheese), the oddest crab cake in the world [menu promised it would be “Full of sweet blue crab meat, fresh herbs and seasonings”; instead, it tasted like it was full of sweet pound cake ???. Did someone misunderstand the “cake” part? This is not a recommended variation]. Two Fat Tires and one Harbor House brew. 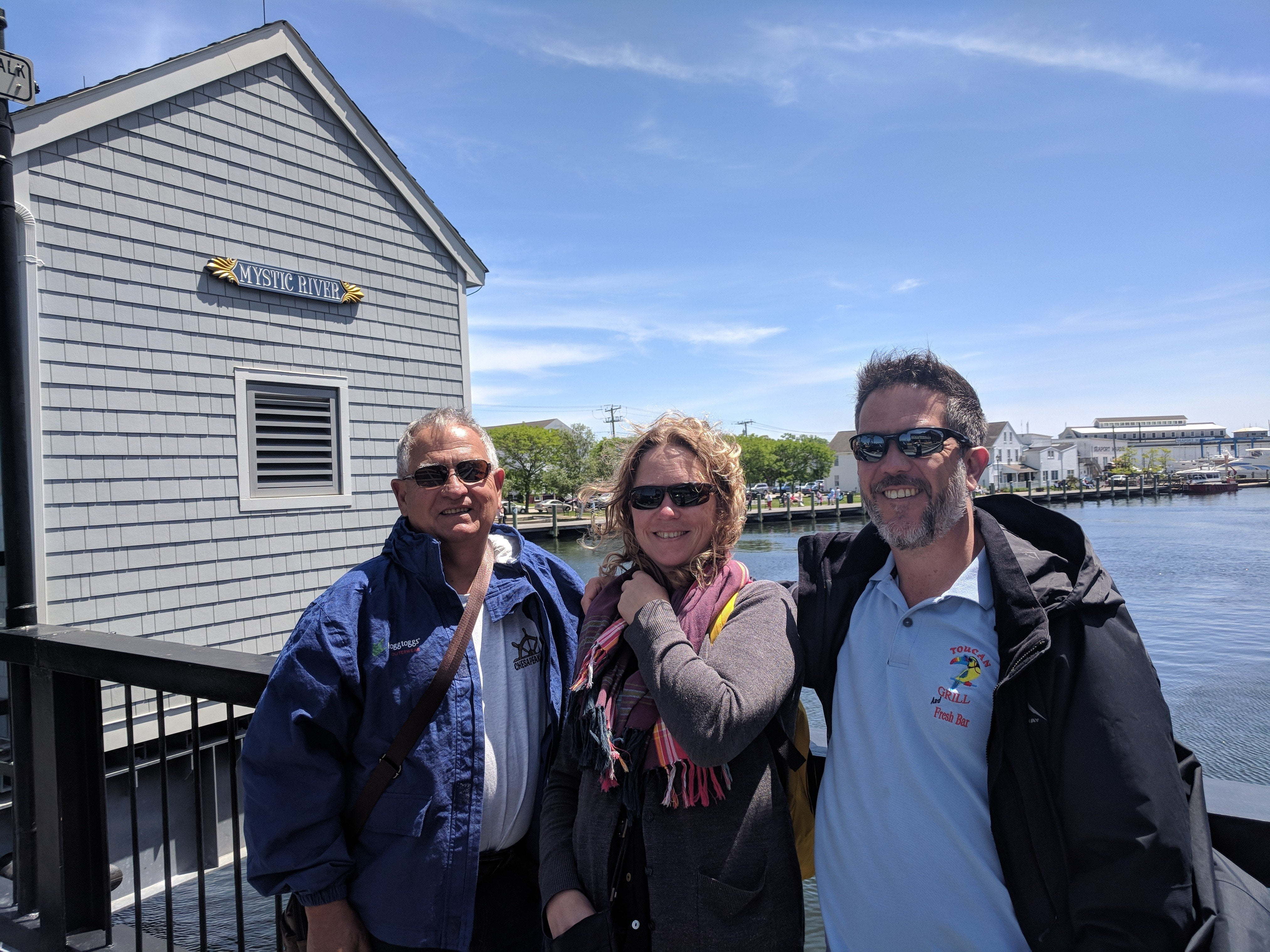 Interim: a walk for the obligatory photo of Mystic Pizza.

Breakfast (on deck, waiting out the rain in Mystic): Mushroom and cheddar fritatta, bacon, toast.

Lunch (on deck, cruising past Roosevelt Island/UN building into New York): Clam chowder and bread with meat and cheese for Captain and First Mate, crispbread with turkey, cheese, tomato for GM.

Late afternoon: Captain and GM mistakenly order 5 G&Ts while First Mate walks the length of Broadway to collect his new iPad. We down 2 each, and then, in a historically unprecedented move, gifted one away, after persuading some chump that a $15 free drink is a stupid thing to turn down. (First Mate, meanwhile, knowing he can’t get to them in time, is drinking a $5.50 G&T in another part of town.)

Main: Branzino en papillote with fennel; pappardelle with wild boar, juniper, and sage; tagliatelle al ragu. House wine (red and white). To finish, pistachio and olive oil cake soaked in limoncello, chocolate torte, ricotta cheesecake with grapes, due caffe corretti, one espresso. (First Mate and GM have been here several times, which is why we were back. Fantastic spot, clearly frequented by local Italianates and other locals. We get it.) But no acknowledgment of the birthday, so sadly only 4.5/5 LBV shooting stars. ????☄️ 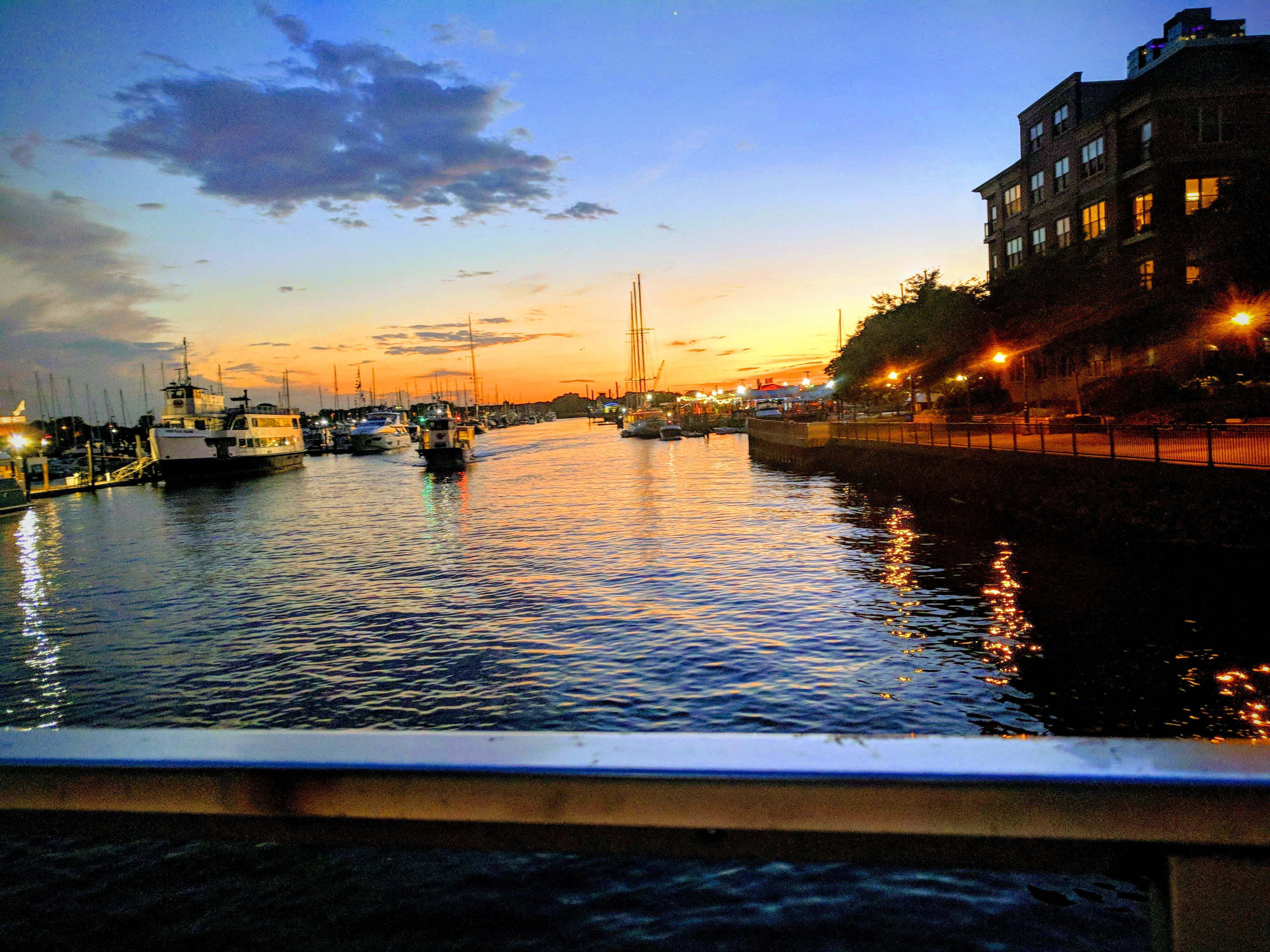 We made the correct choice to Uber to the ferry terminal, but the Uber ejected us prematurely, so we had to hoof it to catch the last ferry, lest we be stranded in New York’s financial district after hours. We made it.

Lunch was at John’s of Bleecker Str.: Two “medium” pizzas, one with olives, anchovies, onions; one with pepperoni, mushrooms, roasted tomatoes, basil ($4 a pop for toppings!). House salad, 1L carafe of red wine. Most of one entire pizza exits the restaurant in GM’s rucksack. For soggy bits, 4/5 LBV shooting stars ????

Breakfast: Bagels for the boys, toast with peanut butter and cheese for GM.

Lunch (en route to Barnegat): Leftover John’s pizza for the Captain and FM; nuts and jerky for GM.

Dinner: Amish sausages, potatoes, green beans, salad. Merlot from Liberty Landing Marina, and an assortment of “chocolate” (ie. candy bars from the marina store). Captain enjoys the last of the KWV (saved in a glass which travelled from NYC to Barnegat). 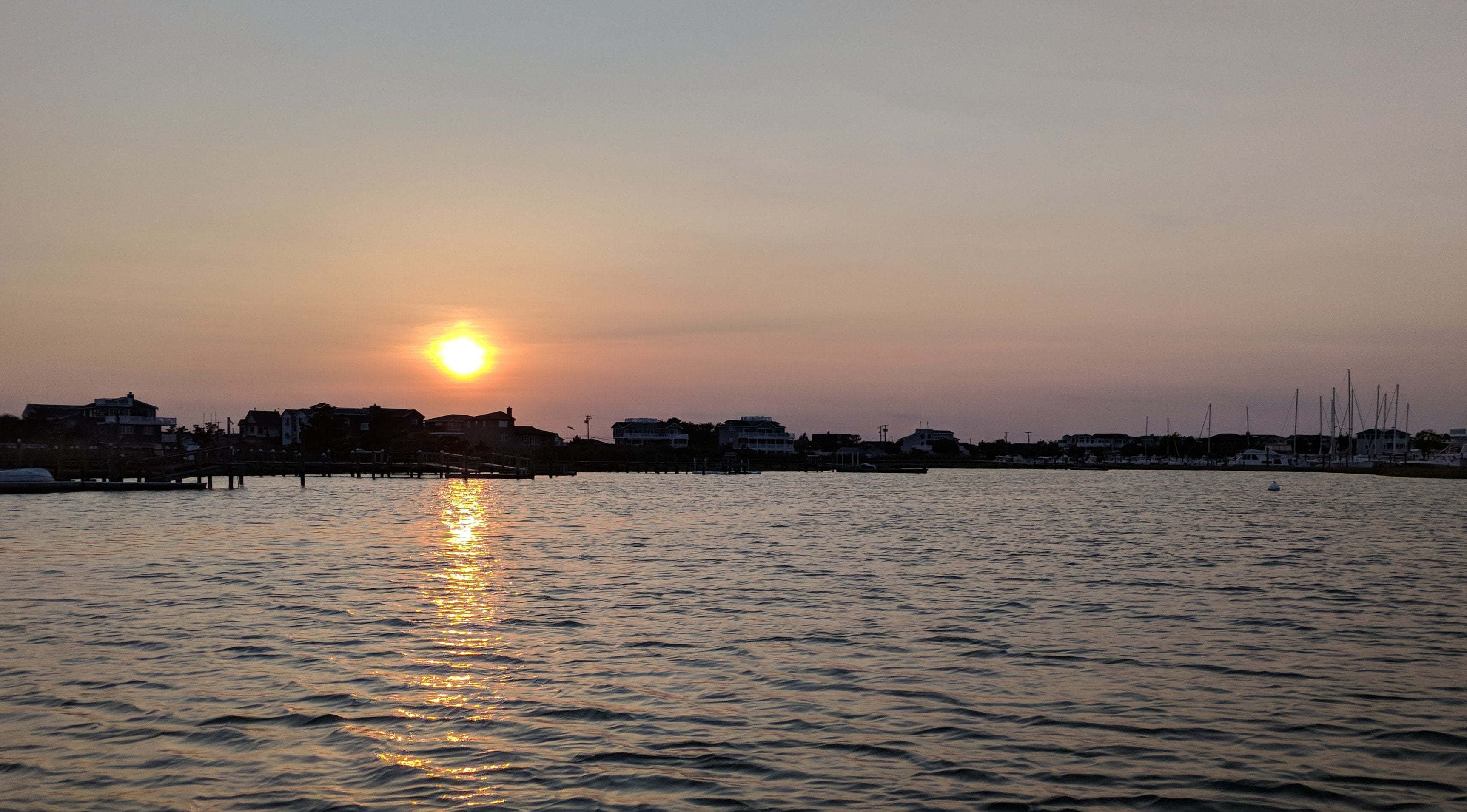 On day 13 [for the superstitious…], we wake to the news of Anthony Bourdain’s suicide, which will shape conversations, reflections and moods not only on this day. Later, GM comes across a picture of Bourdain, as a young boy, with his father on a rented boat in Barnegat, where we are. 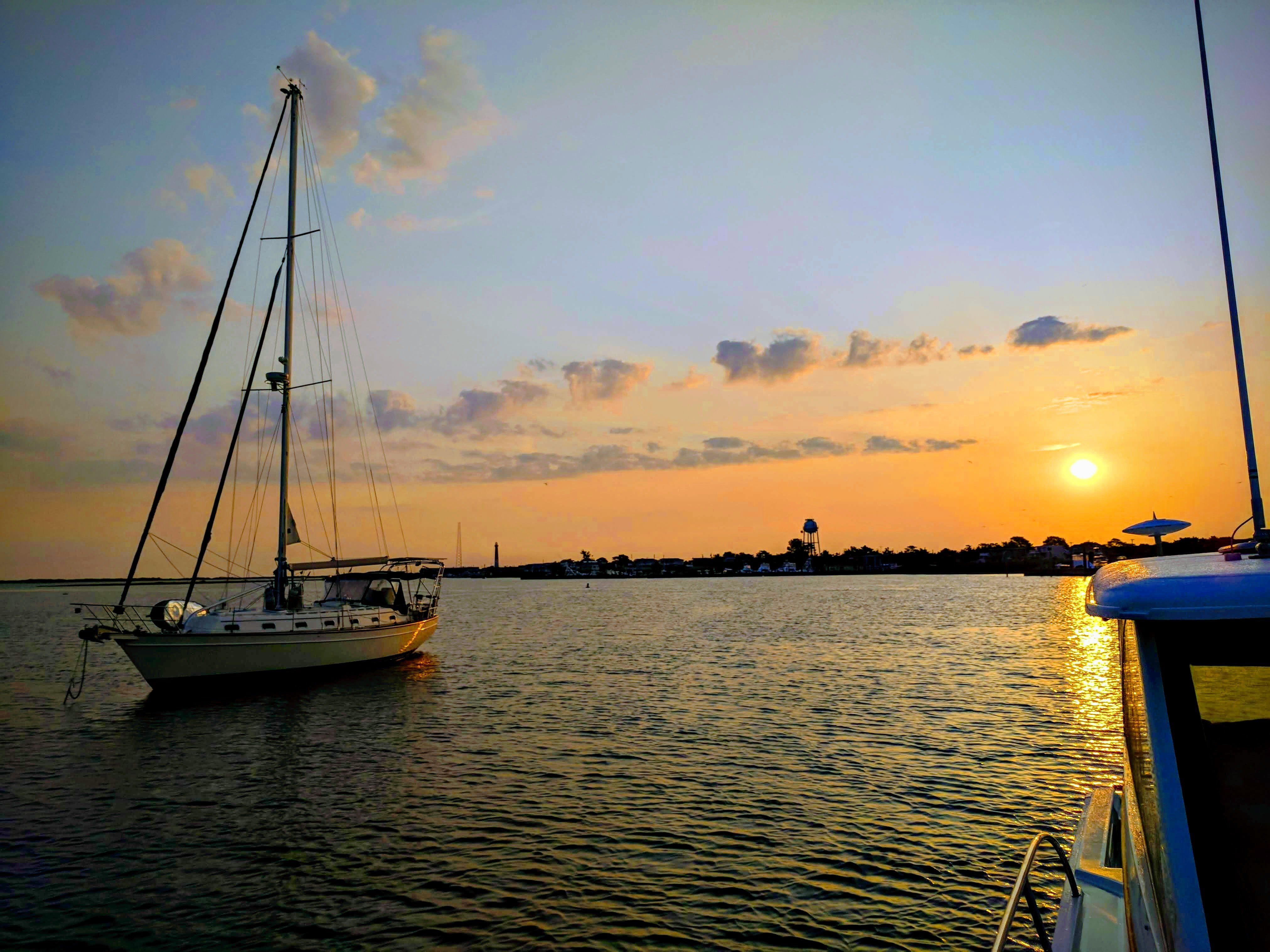 Lunch (en route to Cape May): Toasted cheese, ham and onion sarmies for the Captain and FM (first use of LBV’s new toaster bags!); crispbread with turkey, cheese and pickle for GM.

By the afternoon, we have arrived at Utch’s Marina, in Cape May. We head for the Raw Bar, at the Lobster House. Some small bottles of Pinot Grigio – only one per person allowed! – and 1 doz. oysters for the Captain and FM.

Dinner (Lucky Bones, Cape May, where we are lucky to get a table before 6pm): To start, complimentary bread and olive oil, which the Captain turns into spicy soup when the hot sauce he wants to add a drop of glugs out too generously. We polish it off anyway, while trying to take surreptitious photographs of an odd woman with bright orange hair, reflective orange sunglasses, and a child who looks like a monkey at the next table.

Ordered starters: Zucchini friti with garlic aioli, “hot fired” shrimp (delivered in olive oil with lots of garlic and chilli, bread for dipping). Both superb. To follow: clam pizza [quite possibly the Platonic ideal of such an offering], goat’s cheese and beet salad, crab and shrimp cake with beans, hollandaise and polenta. This meal is excellent, but the place is loud, and the orange woman disconcerting. 4/5 LBV shooting stars. ????

To conclude: Old Granddad bourbon (cleverly procured from C-View Inn in the absence of nearby liquor stores), more “chocolate”.

Lunch (en route to Chesapeake City, which became Bohemia River): Leftover Lucky Bones clam pizza for the Captain and FM; turkey salad with bacon, eggs and cheese all round.

Afternoon (Bohemia River, where there are “allegedly” no jellyfish, so Captain and FM cool off with a swim while GM gets dinner going).

Dinner (on deck, in a triumphant use of the last of everything): Penne “Bolognese”, made from 4 Black Angus burgers, bacon, some onion, 3 tomatoes, a lot of garlic, a generous splash, variously, of white wine, milk, Worcestershire sauce, salt and pepper, simmered for 2 hours and served with the finest Parmegiano Reggiano. Pinot Grigio. Old Granddad. No chocolate. 6/5 LBV shooting stars.?????? Boing!

We anchored out in this. 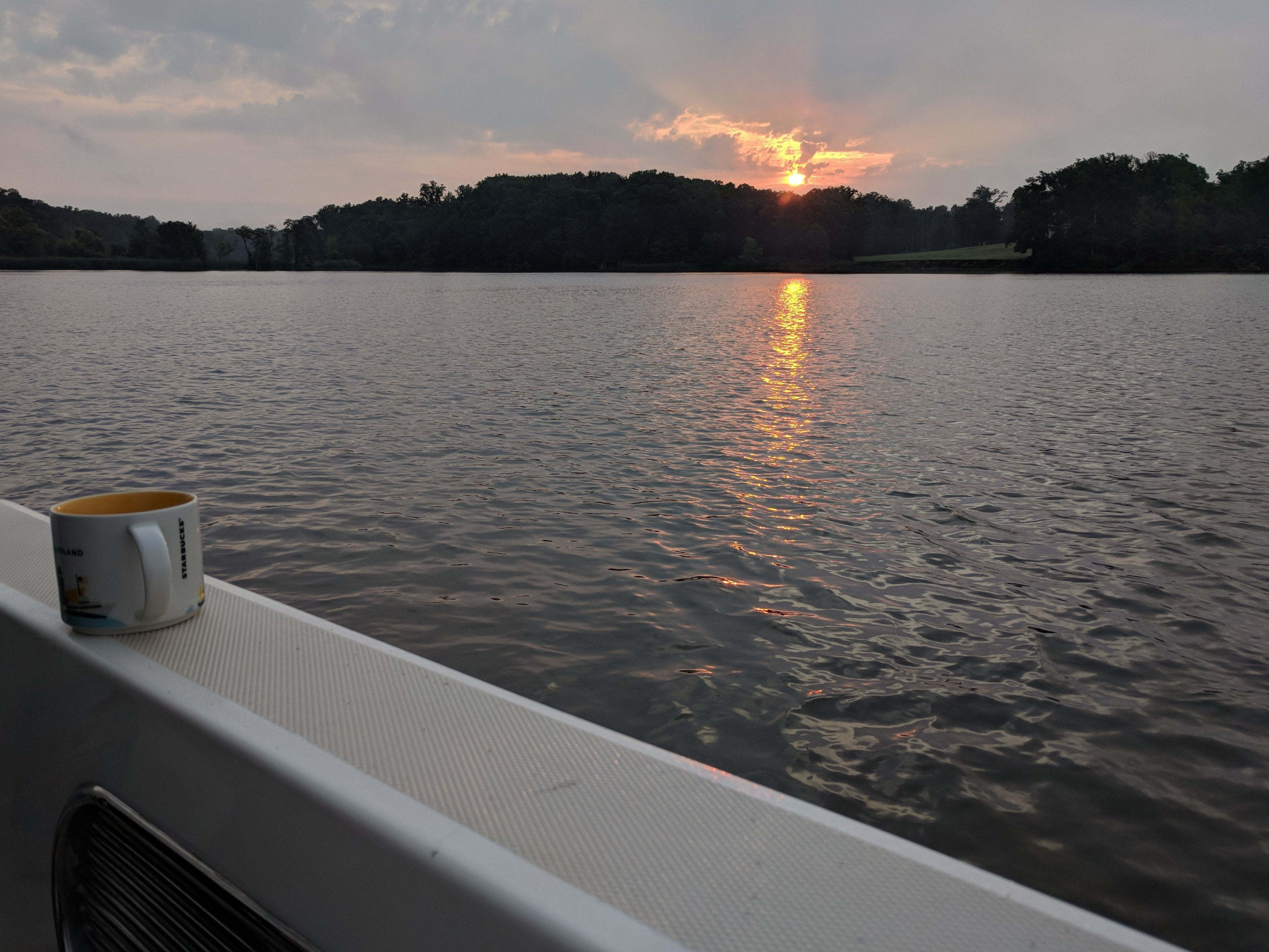