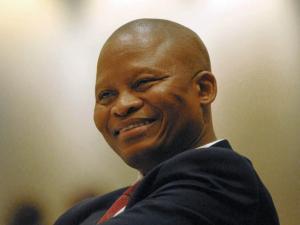 While I intended this column to be a follow-up on my thoughts on Slutwalk, dealing more generally with the topic of gendered epithets and why they are generally wrong, that will have to wait. Because as a colleague put it, I have ‘no infrastructure’ following a recent double-dip round of burglaries, and more than a tablet computer is required for the research needed to do that topic justice.

Instead, it is justice that I’d like to briefly focus on – or rather, the personification of it in the form of Justice Mogoeng Mogoeng. It is of course debatable whether Mogoeng personifies justice at all. Or at least, the version of justice some South Africans would like to see having a voice on the Constitutional Court, never mind as Chief Justice.

Others have written extensively about Mogoeng’s limited track record and his unwillingness or inability to explain his judgements. And while these are matters of legitimate concern, they don’t preclude his being (or becoming) an excellent Chief Justice. What might well do so, however, is the conservatism and homophobia that can be detected in some of his previous judgements.

There is a distinct danger that he would be unable to separate his faith from his duties as a jurist. It is difficult to trust that a Chief Justice who believes that homosexuality is a sickness that can be cured will think through cases involving sexual preference with anything resembling objectivity. His existing rulings in cases of rape also appear to give undue favour to the interests and excuses of men over those of women.

And then, of course, there are the rulings in cases of child rape, which initially appear quite shocking. Last week, a Tweet of mine observed “So, committing rape not so bad if you’re under-educated, poor or gentle with your victim. Am I getting this right?” – because that is certainly the impression you get when reading Mogoeng’s justifications for reducing the sentences of two men found guilty of raping children.

Despite these concerns, one can perhaps still make the case that Mogoeng has done nothing to indicate that he has beliefs that contradict the Constitution, and which thereby make him unfit for the office he has been nominated for. But this, I think, would miss the point and not see the motivation behind my opposition to his candidacy.

Mogoeng, if confirmed, will be Chief Justice of a country with a substantial population of poor people. He will be Chief Justice in a country with obscenely high numbers of reported rapes, and one shudders to think of what the true figure might be. Some of these rapes are ‘corrective’ – in other words motivated by the same beliefs that he holds, but enacted through violence rather than prayer.

This is only part of the context in which this nomination plays out, of course. One could say much more on this nomination: You could perhaps speak of Jon Qwelane, a homophobe deployed as ambassador to Uganda – a country where legislation calling for the execution of homosexuals was seriously considered. Or about that man who nominated him, one JG Zuma, who once told us “when I was growing up an ungqingili (a gay) would not have stood in front of me. I would knock him out”.

On rape, you could observe the possible symmetry between a jurist who seems to hold the view that marital rape is impossible and a President who seems to think a kanga means yes – in both cases, the volition of one party (always the woman) is completely elided, with the judgement of the other (always men) given preference.

And finally, one could of course protest the fact that – in the context of this poor country we live in – it could be construed as offensive that Mogoeng’s church, and presumably the man himself, subscribe to a gospel of prosperity, where your pastor makes lots of money telling you that the route to financial freedom is through more prayer (accompanied, of course, by appropriate tithes). God doesn’t want you to be gay, but he certainly wants you to be rich –just like Bishop David Oyedepo (the head of Mogoeng’s church), Nigeria’s billionaire evangelist.

In light of these sorts of factors, a response such as the one attracted by the Mail & Guardian editorial of August 19, penned by Mac Maharaj, merits anger even more than disbelief. Yes, it is true that we cannot “treat [Mogoeng’s] beliefs and practices … as disqualifications, except when a specific belief or practice conflicts with other provisions of the Bill of Rights”. But perhaps we shouldn’t be in a position to feel motivated to do so in the first place.

Maharaj goes on to say that “you poison your pen when you take elements that are part of the warp and weave of our diverse society and turn them into swear words”. This is really the point, although not the one intended by Maharaj’s sly attempt to deflect attention onto the M&G: There is many a warp in our diverse society – and some of those warps sicken us. So don’t nominate someone to one of the highest public offices unless he shares our disgust, and is unafraid to say so.