Brendan O’Neill, editor of Spiked and hero to the sort of conservative who imagines that words and phrases like “libtard” or “social justice warrior” win arguments, recently posted a Facebook status arguing that “freedom of speech doesn’t mean freedom from consequences” actually means “Best not say it, eh”. 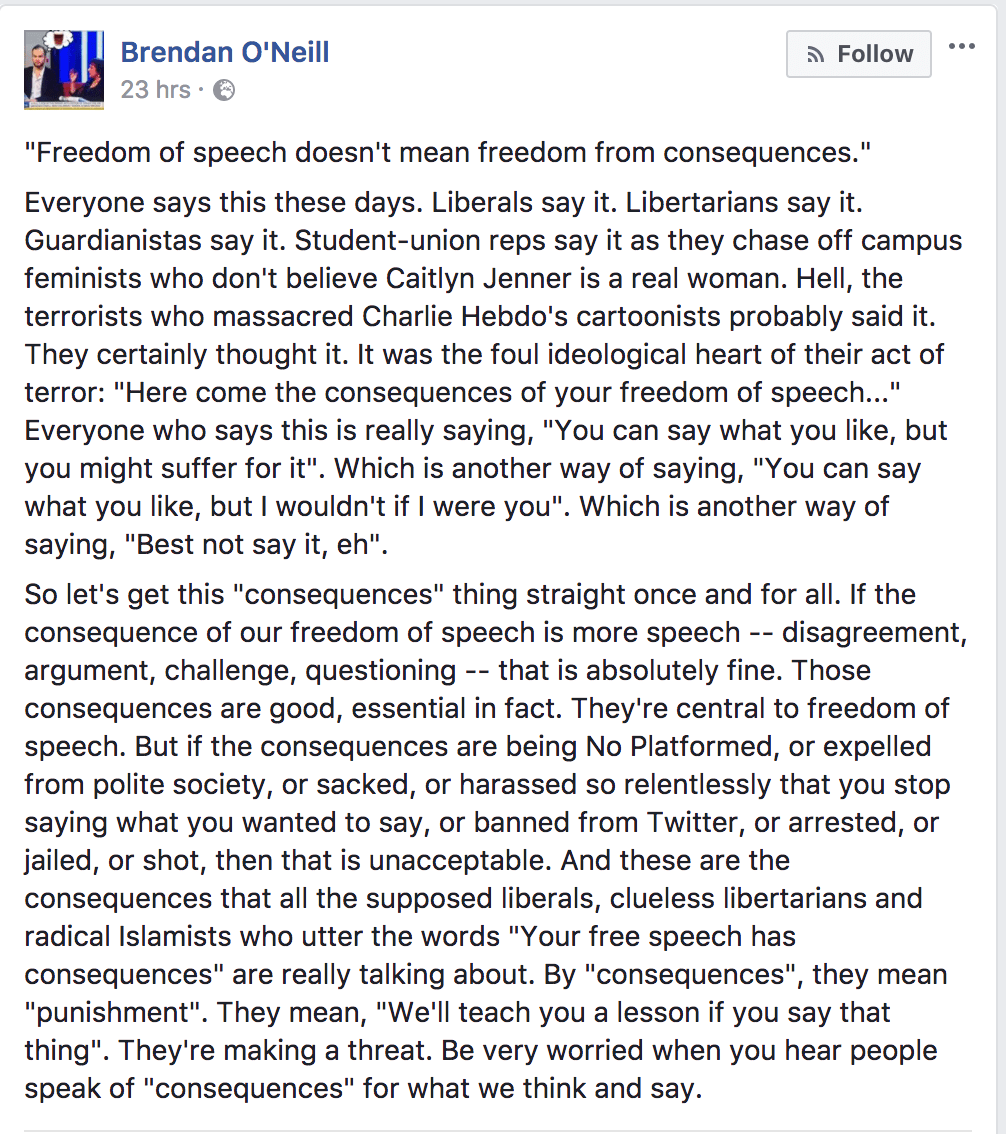 He has a point. It’s true that we’re living in a call-out culture, where perceived violations of political and cultural norms on issues such as gender and race lead to campaigns dedicated to stripping the speaker of authority, including denying them access to platforms from which to express themselves.

It’s also true that there’s not only a danger, but an existing problem, with false positives, in that not only are people afforded little opportunity to explain themselves before being placed in the “basket of deplorables”, but also that there’s insufficient tolerance for deviation from orthodoxy.

The response to sins against orthodoxy has become fairly binary. Instead of there being space to question, for example, whether the sex industry is (or can be) exploitative, a known sex-positive feminist like Kate Smurthwaite is no-platformed at the University of London.

Her views might (of course!) be flawed, and I think she’d be quick to agree with that point. But not allowing her to perform, or not allowing people to make their case at all (as with UCT’s decision to no-platform Flemming Rose in 2016), cedes the argument to one side without ever having engaged with the substance of those arguments.

And sure, sometimes there is no argument to be had, and nothing new to be said. Nevertheless, it’s still worth preserving a default position of being open to debate, because once we consider things settled and not worthy of further discussion, our dogmatism is indistinguishable from that of the ideologues we’re presumably trying to defeat.

Having said that, O’Neill is also completely wrong, or completely disingenuous, because far too many of the folk who argue for free speech in its unfettered form seem to be interested in defending their right to be asshats.

Freedom of speech does not mean freedom from consequences. And one can hold this view while simultaneously thinking that we over-react to offensive speech. The solution to the problem is not, in other words, to caricature all opposition to offensive speech as being hypersensitive fear of hearing anything challenging, as O’Neill does.

Many liberals cite J.S. Mill as their free speech guru, and his words are instructive here:

for such actions as are prejudicial to the interests of others, the individual is accountable, and may be subjected either to social or to legal punishment, if society is of opinion that the one or the other is requisite for its protection.

We can overdo that social or legal punishment, sure, and that’s a problem. But there’s no obligation on us to give alt-righters, or racists, or homophobes, an easy access to platforms to spread their idiocy either.

Cases need to be evaluated on their individual merits, as time-consuming and complicated as that is. And while nobody has the right to a platform, our default position should be to hear what they have to say, and to counter bad ideas with equally free, but better, speech.

All the above brings me to a particular case, presented by a colleague of mine at the University of Cape Town. Co-Pierre Georg, an academic in the African Institute of Financial Markets and Risk Management at UCT, recently published a column on #FeesMustFall and how academics and tertiary institutions should respond to protest.

The tertiary education landscape in South Africa has no shortage of fraught and emotive issues, so unless you’re aspiring to be the next Steve Hofmeyr, it would seem obvious that any contrary and controversial arguments would need to be presented subtly, with an awareness of the fact that – whether you’re right or wrong – part of your audience will be reading simply to prove you wrong.

Ambiguities will be interpreted in the worst possible way. Gaps in the narrative will be considered intentional and malicious, rather than as oversights, and so forth. In that context, it’s best to be careful with one’s facts, for example not repeating falsehoods such as students having killed and eaten zebras (edit – a Tweet from him on this).

More importantly, if you’re dealing with a social crisis premised on the notion that racial privilege has (and is) playing a fundamental role in compromising the educations of black students, you’d really want to avoid saying things like

Yeah, sure, it’s a time-worn phrase, used to describe Attila the Hun, the invading Gauls and so forth. Nevertheless, including it, when it wasn’t necessary and where the point could have been made in various ways not involving the inflammatory word “barbarians”, is astonishingly stupid, and obviously deserving of suspicion.

But: what should UCT do, or what should his department do? Should this speech be allowed, or be censured? The answer is, to my mind, clearly the former – it should be allowed, because even though Georg has used his free speech in the service of being an ass, we get more value from allowing that than the costs we’d bear if shifting social norms end up dictating what’s permissible to say and what’s not.

What he writes, or what I write, are not UCT’s position, or the position of the department that we work for. Those you get from official statements from the University. Anything else is subject to the same rules as everyone else is, namely the norms we’ve encoded in the Bill of Rights.

Constitutional democracies are good, at least in part, because they protect us from complacency through allowing for dissent, and permit the expression of views that could challenge dysfunctional or toxic orthodoxies.

There’s no way to achieve that benefit without allowing for the expression of silly or reprehensible views, except in narrowly-defined cases such as hate speech (and even there, questions can be asked).

But as I’ve said before, being free to do something doesn’t mean it’s a good idea to do so, or that you don’t say something about who you are when choosing what to say. Freedom of speech does not mean freedom from consequence, even if those consequences are sometimes inappropriate.