It’s irrational to not be afraid of dangerous things. We tend to avoid them for good reason – but in some cases, they are dangerous enough that we need to suppress our fears and engage with them, because the danger of not doing so is even more acute.

“We” is of course a gloss on something far more complex. It’s only some of “us” who do this, partly thanks to relative courage levels, and partly thanks to having or not having the requisite skills and knowledge.

But in the case of Ebola, clinicians, epidemiologists and other healthcare workers are not going to Sierra Leone and elsewhere because they want to expose themselves to a very scary risk. They are doing so in order to help eliminate this very scary risk – for themselves, for their families, for you.

Ebola is scary enough that engaging with it – no matter how terrifying it must be to do so – is the only way to eliminate it.

When people do engage with it – for all of our benefit – the last thing we should do is punish them for doing so. Panicking and pandering to fear through stigmatising them in quarantine – whether mandatory or socially imposed – does just that. 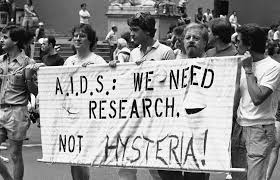 We know that asymptomatic people are not contagious. We know that mob mentalities based on fear are dangerous in cases like this (and more generally), in that we need people to be honest about where they have travelled to, and the risks they might have been exposed to – and if you know you’re going to be quarantined or shunned, you might simply lie instead.

We know that self-monitoring works. We know that we want to incentivise those who are willing and able to engage in this fight to do so, rather than to make them fear stigmatisation.

Pandering to fear is not the solution to Ebola. Watch the video below to see State troopers making sure that Kaci Hickox doesn’t leave her home, even though she’s not symptomatic, and has twice tested clear. CNN reports:

Having to defend herself and not being able to hug her friends, especially after four tough weeks in West Africa, is “painful (and) emotionally draining,” the nurse said. Hickox also said “it’s frustrating to hear nasty things,” saying her intentions going to Sierra Leone was to make “a difference in people’s lives” and her aim now that she’s back is not “to put anyone at risk in this community.”

Of course she wouldn’t want to put anyone at risk – she has a lover, she probably has a family. It would be shamefully insulting to treat her as if she’s putting you at risk, when she’s surely thought of who she might be putting at risk already, and wouldn’t be in public (rather than in voluntary quarantine or hospital) if she thought she was putting others at risk.

Here are some examples of over-reactions based on fear, and ignorance:

I’m currently in the USA, and am hearing far too many fearful conversations about the risks people perceive themselves as being exposed to. Americans can be somewhat paranoid, but the fear is most likely quite universal. It’s difficult, I know, but let’s not make our fears more likely to manifest themselves through panic and misinformation.