As much as being religious can interfere with peoples’ ability to think objectively about moral issues, it’s sometimes the case that antipathy to religion can do so, too.

The former problem arises because people can approach moral problems with unquestionable fundamental rules in mind, given to them by a divine force, and the latter because we should really only care about other people’s values when those values might result in harm, and not simply because we find them silly.

Take blasphemy as an example. It’s said to be a “victimless crime”, and that’s of course true in the sense that there is no deity to offend – that potential victim doesn’t exist. But many devout believers out there can be offended by insults directed at, or even depictions of, their preferred deity.

I take it as a well-justified value that we shouldn’t cause unnecessary harm to others, including to their feelings. There are at least two reasons for this: first, it’s not a nice thing to do, and I try to be a nicer person than my instincts sometimes direct me to be.

Second, I fear that it’s not a sound strategy for getting people to change their minds, because you can simply reinforce a “us vs. them” mindset, allowing for each party to reinforce their prejudices about the other, but not learn whatever it is they might be able to learn from the argument.

To be clear on the case of blasphemy, I also take the legal right to free expression, and even harmful expression, to be a well-justified value. So, if someone is censored from expressing blasphemous views, I’d defend them. However, I’d also defend the view that if you’re blaspheming without some sort of goal in mind – in other words simply to shock or offend – that you’re being gratuitously cruel.

I got to thinking about these things again while reading the Film and Publications Board’s (FPB) recently-released discussion document on the classification of media (pdf), the standards for which are reviewed every five years. Blasphemy is discussed, and the document notes that

blasphemy is not treated as a classifiable element which determines age restrictions, but rather as a matter of appropriate consumer information if it has a moderate, strong, very strong and extreme impact.

In other words, the presence of blasphemy is not sufficient to get a movie classified as PG, or only 16-and-older, or whatever – that presence is simply flagged so that consumers can make an informed choice, and avoid content they don’t want to see or hear.

This seems entirely reasonable and appropriate to me, as it is to my mind analogous to content warnings about nudity, profanity, violence and so forth. All of the things we are “warned” about cause less or more offence based on subjective preferences, and the fact that more consumers might care about avoiding exposing their children to naked people having sex doesn’t, by itself, settle any questions about whether that’s a harmful thing to expose them to.

Furthermore, just how much nudity is required to result in moral wrongness, or a violation of subjective preferences, will depend on who you ask. Lastly, any of these preferences are possibly irrational, in that it might simply not be true that exposure to these things causes harm.

Blasphemy is like these other examples in those respects, so any claim that it’s wrong for the FPB to be concerned with blasphemy at all, never mind how they implement that concern, can’t simply rest on the claim that religion is absurd, or that blasphemy is a “victimless crime”.

Those sorts of responses seem to treat religious views prejudicially, in that they are not afforded the same respect as other strongly-held views simply in terms of the offence caused, regardless of whether they merit respect on epistemological grounds. Furthermore, those responses indicate a willingness to accept – without applying any similar scrutiny – someone’s value preferences in terms of whether they want their children exposed to portrayals of violence.

I don’t think we get to dictate people’s values, except, as noted above, when they conduce to harm. There are quite likely to be religious parents out there who might have no qualms about others committing blasphemy, but would want to only expose their children to it when they are, say, 16 – and where the parent thinks there’s a good chance that enlightening discussions can ensue rather than simply the sort of confusion a child might feel when something her family (and maybe she herself) takes seriously is being ridiculed. A content warning gives that parent the information they need to make that informed choice.

The problem with the latter suggestion is that I do believe in limited paternalism, and the FPB or cinemas would have no idea of whether the 12 year-old who walks in to watch Lolita isn’t being groomed by that guy in the raincoat, over there in the corner.

Furthermore, they say that they are guided by “community values”, and not just abstract argument, which could also make it defensible that one only warns about some things, while using other things to inform classification.

I’m not intending to defend the FPB here, at all. I have a long list of reasons to think them incoherent, inconsistent, and more problematically for a regulator, beholden to religious and political lobby-groups.

For example, they for a time endorsed the homophobic preacher Errol Naidoo and his Family Policy Institute. They recently classified Inxeba X18, which means it can only be shown in pornographic theatres, even though they don’t seem to be able to explain what’s pornographic about it, and instead simply seem to be protecting the sensitivities of a subset of the culture whose practices are being portrayed. (The X18 classification is being contested by the filmmakers and other interested parties.)

Last year, they tweeted the following (archived on Mambaonline), thereby possibly reinforcing the malicious stereotype regarding homosexuals being disproportionately sexually interested in children compared to heterosexuals: 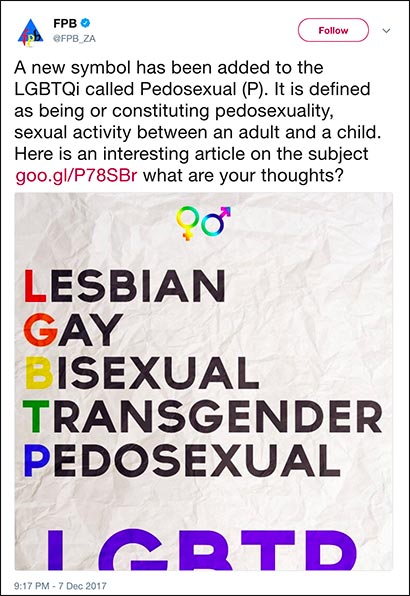 And, lest we forget, they classified an artwork (Brett Murray’s The Spear) 16N, and announced their intentions to engage with Internet service providers and search engines to have photographs of The Spear removed from view.

The mechanism for doing so would presumably have been the mooted Internet and Cell Phone Pornography Bill, soon-to-be-ex-Finance Minister Malusi Gigaba’s plan, drafted in consultation with Errol Naidoo, to enforce a certain conception of morality on the Internet and telecommunications.

The FPB’s review of their classification guidelines are open to public comment until March 27, and public consultation sessions will be held between 19 February and 13 March. Those of you concerned about Inxeba‘s classification, or any aspects of the FPB’s operations, might want to read the guidelines and provide your feedback through one of both of these processes.

To conclude: yes, blasphemy should be permitted, and certainly shouldn’t be cause for a movie to be classified. Ideally, people shouldn’t even be offended by it. But our present situation is this: blasphemy does not result in a movie being classified. And, some of your fellow humans are offended by it, or simply want to be forewarned about it, because they think it might strike an off-note during their weekly film club screenings.

We can let them have that, surely? After all, if blasphemy is so trivial, perhaps us atheists can sometimes act less concerned about it.